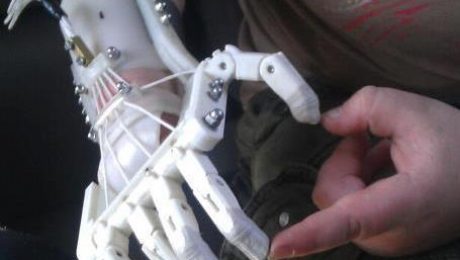 The media has been aflutter with the progress on the highly controversial 3D-printed pistol, the Liberator, but has paid relatively little attention to the other side of 3D-printing which is intent on helping others. On the other side of the world in South Africa, Richard Van As, a master carpenter has collaborated with Ivan Owen, a Seattle, Washington prop maker to build an affordable prosthetic hand that has the potential to revolutionize the world of prosthetics.

Dubbed Robohand, this concept came into being after 3d-printer manufacturer MakerBot stepped in to help Van As and Owen as they struggled with the prototyping process by donating a pair of Replicator 2 3d-printers to their efforts. The devices helped the 2 men reduce the prototyping and testing cycle down from weeks to minutes, thanks in part to the mechanical speed of the Replicators, as well as the ability to collaborate digitally through MakerBot’s Thingiverse.org website to exchange designs and changes instantly. The result: a simple, affordable (less than $200 in materials) prosthetic that has already helped several children gain function in missing hands due to Amniotic Band Syndrome.

3d-printing has been around for several years, but has only been hitting the front pages of mainstream media because of the controversy surrounding the creation of weapons that have the potential to avoid metal detectors. As with most things that are as disruptive as 3d-printing, the potential for both good and bad will be thoroughly explored by humans. Devices like MakerBot’s Replicators use materials and plans that are easy to acquire, which means things like the Robohand (and yes, the Liberator) can be quickly created just about anywhere in the world. Unlike the invention of the nuclear bomb, 3d-printing is more akin to the invention of the printing press by democratizing its potential for the masses. We can only hope that the creation and spread of Robohand-type devices overwhelm our more destructive and violent tendencies.