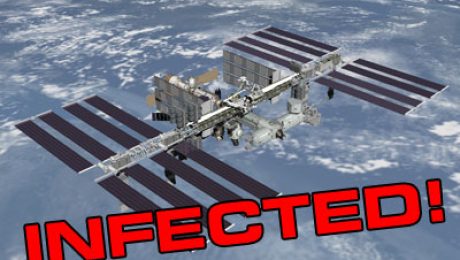 It sounds like the title of a wonderfully bad sci-fi B-movie, but it’s actually happened: the Internation Space Station is infected with a computer virus. Not only is it infected, it’s infected with a famous virus, Stuxnet, which was used to cripple (allegedly) Iran’s nuclear weapons program. Originally designed specifically for infecting Iranian nuclear power plant systems, Stuxnet has since “gone rogue” and is now doing its dirty work around the globe. The virus was designed to be spread not only via network connections, but through flash drives and disk drives as well, primarily because many nuclear power plant control systems are too old to be connected to the internet, which is a scary thought on its own. In the case of the ISS, Stuxnet stowed away on a USB thumb drive brought on board by an astronaut.

As the story above illustrates, humans continue to be the weakest link in the chain of security. You can spend tons of money on securing your technology, but it can all be blown away by a $10 thumb drive and 30 seconds of careless behavior. A big part of security is training your people not only on what NOT to do, but also on how to be vigilant and careful. As a society, we are starting to understand just how pervasive malware has become, but there are still a surprising number of people who continue to be caught off guard and impacted negatively. Given how this paradoxical, and very human behavior isn’t limited to just technology risks (think about drugs, alcohol, tobacco, base jumping, junk food, etc.) it’s no wonder malware has continued to thrive despite its destructive nature.