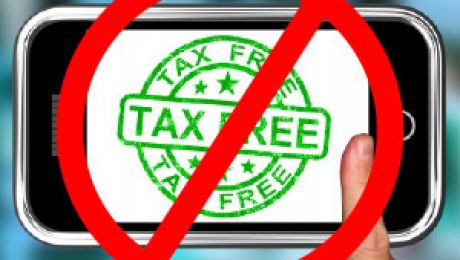 Shoppers enjoy online purchasing for a variety of reasons, but the lack of sales tax is probably highest on that list of perks. That may soon change due to a revamped Internet Tax bill re-introduced last week on the Senate floor, and one which could be voted on as early as this week.  The “Marketplace Fairness Act“, penned by Sentor Mike Enzi (R., Wyoming), essentially requires any internet business with more than $1M in online sales to collect taxes on the US’s estimated 9600 state and local taxing authorities, something that brick-and-mortar businesses don’t have to do, even if sales come from across state lines (and presumably through channels other than the internet). Opponents of this bill state that this places an unfair burden on smaller internet businesses, as calculating and processing taxes for nearly ten-thousand different localities presents a logistical nightmare with which even large companies struggle. Obviously, brick-and-mortar companies back this bill, especially the big ones – Wal-Mart is a vocal backer, but even online retail giant, Amazon.com has thrown in their support. It may surprise no one that they have a dog in this race – Amazon offers a subscription-based tax-processing service to online retailers.

If you sell more than $1 million in taxable goods on the internet to customers in the United States, you might need to look at some serious upgrades for your online store in the near future. On top of the huge headache this creates for your website administrator and programmers, this may also complicate your shopping cart process, and your customers may be in for a shock when they discover that their online shopping isn’t paying off like it used to. Opponents say that this bill will throw a wet-blanket on online shopping, and could be a huge damper on the struggling American economy. The bill hasn’t been made law yet – but it may behoove you to find out where your local government representative stands on this issue.